Target Flies Before They Target Your Cattle!

As the temperature increases so too does the fly population resulting in misery for cattle across the UK. Are you aware though, that as well as causing a severe nuisance to cattle, flies can also be responsible for the spread of certain diseases?

There are two ways in which flies cause harm to cattle:

Summer mastitis generally occurs in non-lactating animals during the summer months. It is a bacterial disease caused by a number of bacteria acting together. It is believed to be spread primarily by the fly the head fly (Hydrotea irritans).

In cattle, large numbers of this fly cluster on the ventral abdomen and udder and the bacteria is mechanically transmitted from animal to animal.

The head fly lives in sheltered areas such as bushes/trees and only has the ability to fly in very calm, damp, humid conditions. As a result of this, the incidence of summer mastitis is highly variable and tends to be associated with 'problem fields' e.g. adjacent to woodland.

Disease may be present for up to a week before the animals appears systemically ill which is why it is important to check stock frequently during high risk periods. Be observant and look for swollen/enlarged teats - the consequences of summer mastitis are severe and animals may abort/die if untreated.

This disease often goes by 'New Forest Eye' or 'Pink eye'. It is a highly infectious disease caused by the bacteria Moraxella bovis. It can spread rapidly during the summer months and is more common in young stock. Head and nuisance flies act as mechanical vectors for the spread of this disease. The ocular lesions are very painful and disrupt grazing patterns resulting in poor performance and weight loss.

Blue Tongue and Schmallenberg in cattle

Both of these diseases have been shown to be transmitted by the Culicoides species of fly.

Bluetongue virus is generally not symptomatic in cattle. However, cattle act as reservoirs of infection which can be transmitted to sheep causing more severe disease.

Schmallenberg rarely shows clinical disease in adult animals and often the first suspicion of disease occurs when a deformed calf is born. Where it does affect adult cattle, it causes milk drop, fever and diarrhoea.

Your local vets and SQPs have a great deal of fly control knowledge so speak to them for advice and they can help you to design an appropriate strategy for your herd. 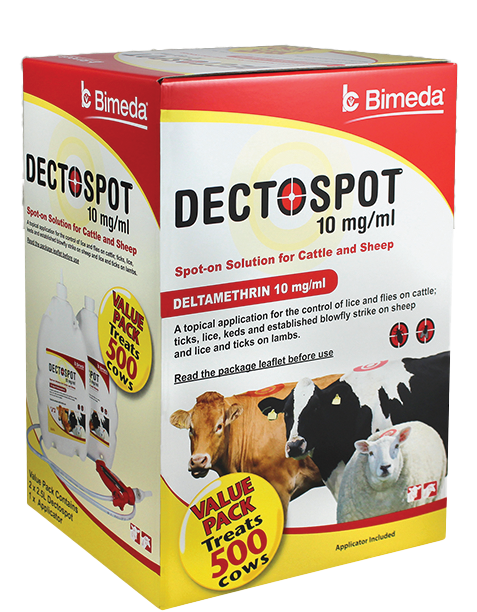 Please consult your SQP or vet to determine which is the most appropriate for your herd and consult the SPC data sheets on the VMD website for further information on which species of fly are controlled and with which preparations.